Info about the GFS

In many cases physical and chemical phenomena related to the surfaces of solids are very important Examples could include cases in medicine such as the interaction between bone and a prosthesis, or lubrication in mechanical systems, adhesion of surfaces and in many chemical reactions, such as catalysts and corrosion. Apart from purely practical aspects of this kind of phenomena a large number, are in them self’s of considerable academic interest. The Surface Physics Laboratory investigates both practical and academic aspects by means of experimental techniques and computer simulations.

There are basically four major lines of research in the group:

Surface structure and morphology have different meanings for different areas of science, in surface science a “surface” usually means the last three or even four outer atomic layers of a solid, but in many cases just the last atomic layer. The term “surface structure” can refer to two different aspects of a surface, how the atoms are arranged or how the electrons are distributed around the surface atoms. The figure below represents the geometric structure of a palladium crystal (orange and gray) with antimony atoms on the surface (blue). This structure was determined in the groups laboratory by photoelectron diffraction. 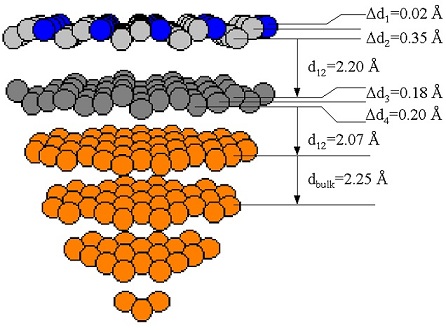 Atomic layers and sub-layers and the distances between them 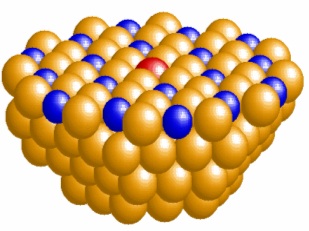 Atoms grouped tightly in the material

The word 'morphology', in turn, refers to the shapes of tiny irregularities that may appear on surfaces (steps, pyramids, etc ...). The irregularities of nanoscopic sizes (with a few dozen atoms across) are those with greater interest in this field, because they can drastically alter physical and chemical phenomena.

One very common example is the case of solid catalysts. Most of the chemical reactions involved in industrial processes include the use of catalysts, which are substances that increase the efficiency of reactions but are not part of the reaction, being almost completely recovered at the end of the process. The process by which the surface of a solid catalyst affects a reaction is of interest to Surface Physics. Apart from the composition and structure of the catalysts surface if irregularities are purposely added to these surfaces, they can increase the efficiency of the catalyst with a minimum additional of material.

The Surface Science Group at Unicamp works on understanding the effects of composition, structure and surface defects influence catalytic activity.

Besides catalysis, magnetism is another class of physical phenomena that is strongly influenced by the presence of nanostructures on surfaces, because it depends crucially on how electrons are distributed around atoms and nanoirregularidades are able to alter this distribution.

All of these parameters the geometrical structure, the electronic structure, and morphology can be combined so as to produce different effects. For example, when one changes the way iron atoms are arranged they can change from ferromagnetic to paramagnetic. The same effect can occur if the dimensions for iron samples that are very small, that is are nanoscopic.

How then does one do this kind of experiment? For example in a real catalyst many phenomena are occurring almost simultaneously and it is impossible to separate out each step, so to understand, how a catalyst works, or the physics and chemistry involved in a catalytic reaction it is necessary to try and simplify the problem, Therefore scientists try to create in the laboratory, a model "catalyst", which mimics the real thing but in which it is possible to control many of its variables.

For example, in cars, there is a solid catalyst in the exhaust, which transforms the poisonous carbon monoxide (CO) and nitrogen monoxide (NO) produced by the engine in to carbon dioxide (CO2) and nitrogen dioxide (NO2) that are much less harmful to our health. To study the physics behind these processes we try to produce in the laboratory, a surface similar to the car catalyst , but with regular atomic structure consisting of a few molecular layers (a "nanofilme")of the same material deposited on a very well ordered support. Now, we can introduce small variations in the surface and study how they influence the interaction between it and the different gases (CO and NO). Also one can add controlled amounts of nanoparticles of metal such as palladium or rhodium (or even some alloys), and observe how gases interact with this new surface. In this way we can analyzes for example how nanoparticles influence the transformation of CO to CO2, or which surfaces are able to adsorb more or less CO etc..

Even with controlled experiments, the system is still very complex and difficult to make and even introducing small changes can be very time consuming, so it can be useful to try and simulate the results obtained in the laboratory with computer models of the behavior of surfaces. To make a simulation, it is necessary to "postulate" a model of the surface, with it’s geometric and electronic structure and morphology. One then compared the simulation results with the experiment. The model can be fine tuned to improve compliance. When one is satisfied that it correctly describes our surface, we can test in the computer what happens when we change a few parameters such as the distance between the atomic layers, the size of the nanoparticles, etc.

The group basically uses three techniques to study surfaces. First a technique call x-ray photoelectron spectroscopy (XPS), were one focuses a beam of X-ray photons on the sample, the photons cause the material emits electrons then using a fundamental principle of nature, energy conservation, it is possible to analyze the energies of electrons emitted and extract information about the electronic structure and chemical composition of the sample. The electrons can be produced directly by the absorption of photons by matter (photoelectric effect) - see figure below - or indirectly through a more complex process (Auger effect). This latter effect can also be produced by collision of electrons with the sample. 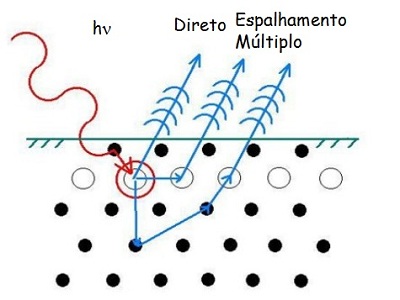 The second technique is the diffraction of electron by the crystal lattice of the sample. The electrons can be the electrons produced by photoelectric effect inside the material under study (XPD) or by an external electron gun (LEED). Thus, in the case of XPD the electrons carry information on the composition of the sample, they also carry data on the geometric structure, that is, the arrangement of atoms in the material.

The third method is scanning tunneling microscopy (STM), capable of providing images of nanoirregularidades or even to distinguish the positions of individual atoms on the surface.

More specifically, the main experimental techniques used by the group are: 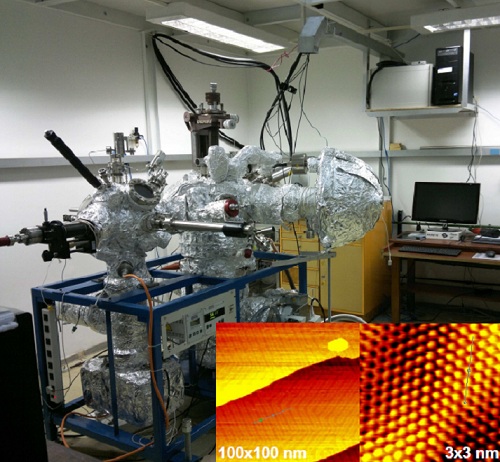 Surface Analysis System with STM, LEED and XPS Surface Physics Laboratory of the IFGW-UNICAMP. Inset, STM images with atomic resolution at room temperature herringbone reconstruction of Au (111) obtained with this set up

The group was formed around 1975, initially with seven researchers. The initial interest was in the chemistry of catalytic surfaces, with emphasis on the oxidation of CO to CO2 – reactions important for the elimination of CO produced by cars.

Despite the initial emphasis on catalysis, the interests of the team soon became multidisciplinary, reflecting the variety of phenomena involving surfaces. So from the beginning there were numerous collaborations with external groups in several areas - corrosion, lubrication, and heterogeneous catalysis, etc The group's research on the physics and chemistry of surfaces has expanded from using just XPS and Auger spectroscopy, to include XMCD, STM imaging, quantitative LEED, and XPD. These last techniques require intensive use of computing, so the group has it’s own high performance parallel computes cluster.