Info about the LMD

Nowadays, the group's studies are focused on new properties of graphite/graphene and related semimetals discovered by its members since 1999. The graphene boom began in 2005 when the Manchester University (UK) group reported on a simple way to extract graphene from bulk graphite and explored its physical properties. In 2010 Nobel Prize in Physics has been awarded to physicists from the University of Manchester for work performed on graphene.

Studied graphite is not the same graphite that we have in the pencil, but in a form called "highly oriented pyrolytic graphite" (HOPG), made of carbon atoms arranged in hexagons that form planes arranged in layers (see the illustration). The main difference is that in a common graphite, there are many irregularities and defects that affect this order but in HOPG, very few. The term "pyrolytic" refers to the way it is obtained (decomposition of organic substances by heating, or "pyrolysis").

The main “new” properties of graphite are: 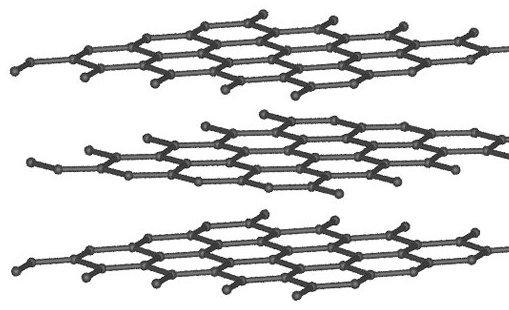 Metal-insulator transition – An applied magnetic field can make metallic-like graphite to the insulating-like and vice versa.

Ferromagnetism – It means that, under certain conditions, the graphite is easily magnetized and easily attracted to magnets. The interesting point here is that, unlike in ordinary superconductors, in graphite, ferromagnetism and local superconductivity can coexist.

Quantum Hall effect – This is a variation of the Hall effect discovered in 1879 by Edwin Hall (1855-1938). He found that when applying a magnetic field on a conductor through which an electric current is passing, appears a “secondary” current, beyond that already existed, perpendicular to the first (see diagram opposite). In 1975, T. Ando theoretically predicted that this effect could have unique features if the conditions were: very low temperature, very intense magnetic field and the atoms of conductor arranged in a plane (as in graphite/graphene). Under such conditions, the conductivity of the material for this “secondary” current could display only specific values, i. e. the conductivity would be "quantized." This effect has been observed experimentally by Klaus von Klitzing in 1980, who won the Nobel Prize in Physics in 1985.

Presence of Dirac fermions – The electrical current is usually nothing more than moving electrons through a material. It turns out that under certain conditions, these electrons behave quite differently from normal electrons - they exhibit properties similar to photons, quanta of light, viz. behave as if they were massless. Particles with these characteristics are called "Dirac fermions", and these have been observed in graphite by LMD researchers. 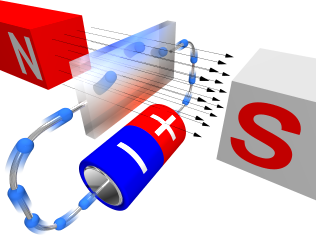 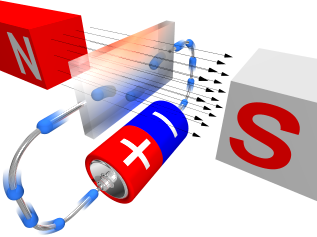 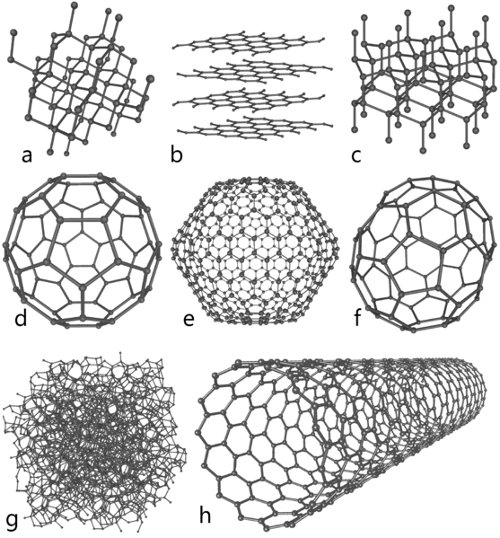 Graphite is actually one of the forms that carbon can take, which differ by how the atoms are arranged - it says "allotropic forms" (see illustration). The group is also studying properties of other allotropic forms of carbon such as nanodiamonds (diamonds with only a few tens of atoms diameter), fullerenes (composed of many "balls" of 60 carbon atoms), nanotubes (tiny tubes of carbon atoms diameter) and graphene (one plane of graphite). We are also studying "new" materials by the introduction of tiny amounts of "impurities" in graphite (the technical term is "doping" - the same method by which one becomes a semiconductor suitable for making transistors and integrated circuits).

Furthermore, we found similar properties in related semimetals such as bismuth (Bi) and antimony (Sb), and we are studying them currently. For instance, in Bi we have also found the metal-insulator transition, the quantum Hall effect, and the superconductivity. The later, despite being similar to that in graphite, has some different features. In particular, it is not just local. Our group observed for the first time superconductivity in bismuth about 8 K (-265 ° C) induced by metallic contacts of silver placed on the surface of bulk polycrystalline samples. This result is in good agreement with some theoretical predictions.

What inspires these studies is the basic research and possibilities of applications as well. Because of the metal-insulator transition in graphene/graphite , one can control their electrical properties with external magnetic field and make it work similarly to the MOSFET transistors. The advantage over the silicon transistor (the most used) is that with graphene, devices can be made much smaller. The silicon devices allow you to build up to 10 or 20 nanometers (about 100 or 200 atoms) in size; graphene can overcome this limit. But there are still several obstacles, such as great sensitivity of graphene to adsorbed atoms, or interactions with the "support" (the substrate) on which graphene is placed. Another research topic of our group is to eliminate these obstacles.

The emergence of the group, founded in 1987 by Sergio Moehlecke, was a result of the discovery of high critical temperature superconductors ("high-Tc") one year before. Until then, superconductivity could only be obtained at most a few tens of degrees above the absolute zero, which requires that the material was cooled with liquid helium, which is prohibitively expensive.

In 1986, ceramic materials (cuprates) were discovered to become superconducting above -196 degrees Celsius. It still seems too cold, but this temperature can be obtained with liquid nitrogen, so cheap that is thrown away each day after experiments in teaching laboratories. The dream of zero resistance seemed economically viable - though more practical obstacles still hinder its use for large commercial structures, such as long wires.

Immediately, a large number of laboratories around the world began to exlore the new superconductors, called "high temperature superconductors." (HTS) In the group of Ivan Chambouleyron (Photovoltaic Conversion Laboratory) in Campinas, Sergio Moehlecke, started to work on HTS, and distanced himself from the main research of the group, about optical memories (devices that use lasers to record and read information). Then he created a new group, Laboratory of Materials and Devices.

The research pre-graphite – The activities of the new group, besides the high critical temperature superconductivity, included the study of properties of thin films (very thin films that can reach a few atoms thick), metallic super-nets (formed by repetition of few atom layers thick of different materials exhibiting different properties of the common materials) and micromachining (a process to "esculpt" in the silicon, through corrosion controlled with high precision, the microscopic structures necessary for the fabrication of microelectronics devices) .

In 1993, Yakov Kopelevich arrived in the group, from A. F. Ioffe Physico-Technical Institute, St. Petersburg, Russia, after two years working at the University of Bayreuth, Germany. At that time, the group was focused on the mixed state of type II superconductor properties, in which the magnetic field penetrates inside the material as vortices, i. e, one quantum of magnetic flux. Type I superconductors are those in which magnetic fields are able to destroy the superconductivity, and the type II are immune to these fields.

Graphite – In 1999 researchers of LMD discovered local high temperature superconductivity in graphite and then several other unusual properties of this material, such as the quantum Hall effect in 2003, and Dirac fermions, in 2004. Once these new properties were also observed in graphene in the universities of Manchester (UK) and Columbia (USA) in 2005, the number of articles on graphene and graphite increased dramatically. Currently, the lines of research involving graphene-based materials are being considered as the most important of Solid State Physics, and the Nobel Prize in Physics 2010 was awarded to physicists from the University of Manchester for work performed on graphene.