Medical Radiological Physics is the branch of Physics related to the application of ionizing radiations to the diagnostic and therapy of human being diseases. They can be oncological or non-oncological problems.

Our group carries out basic and applied research on the biological effects induced by ionizing radiation on living beings. This issue is of paramount importance in the medical applications of these radiations, as well as in other areas (e.g. the aerospace and mining industries).

The interaction of ionizing radiation with human beings leads to DNA damage. This damage is closely related to the origin of cancer as well as with its treatment through the radiation therapy. The Radiobiology is the branch of science that studies the biological effects produced by ionizing radiations. There are two main approaches to study this kind of effects, experiments and simulations. The former is based on the use of in vitro cellular cultures exposed to ionizing radiations. The latter is based on the combination of biophysical models with Monte Carlo codes for the radiation transport simulation. Experiments present limitations to reproduce arbitrary combinations of irradiation setups and DNA configurations, among other parameters. Biophysical simulations allow to make a wide range of parameter combination and to discriminate between the influences of many factors, much of them impossible to be resolved in in vitro experiments. However, experiments and simulations are complementary, as in many branches of science. The GEANT4-DNA European project is intended to develop a computational package to simulate the transport of ions and electrons down to very low energies (~0.025 eV for electrons). This package would be used for nanodosimetry in Radiobiology. Our role into this project is to create biophysical models to validate the GEANT4-DNA package in radiobiology-related problems.

The scope of the proposed project is to develop a geometrical model of the human genetic material, accounting for six (6) organization levels for the three main DNA configurations (A, B and Z). In addition, a new biophysical model to simulated the DNA damage due to the impact of ionizing particles (direct damage) or water-derived chemical species (indirect damage) will be developed. The main scope of this project is to build up a computational tool to predict the relative biological effectiveness of photon, electron, and ion beams used in Radiation Therapy and Diagnostic. 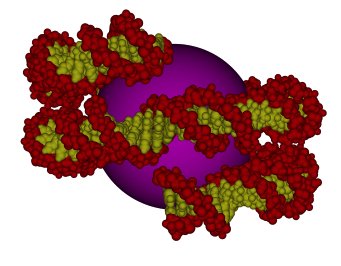 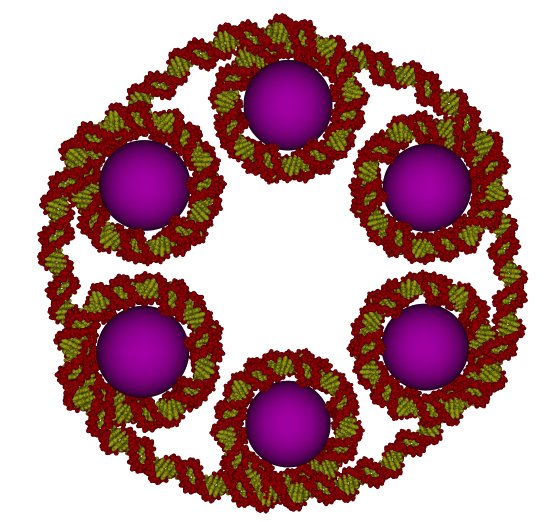 Atomistic geometrical model the B-DNA configuration. This model explicitly accounts for ~4x1011 atoms and it is being used in our current simulations