Info about the GNF

The Neurophysics Group investigates the brain dynamics using techniques such as magnetic resonance imaging (MRI), electroencephalography (EEG), optical tomography (OT) and X-ray computed tomography (CT). The idea is to study both the normal and pathological brain conditions, in order to better understand brain structures and functions.

Although the conditions studied are many, the focus is on epilepsy, due to its potential for scientific research, - the investigation of its causes can provide important elements for understanding brain function -, the amount of research done on the subject and its scientific topicality. The term "epilepsy" refers, in fact, to a wide range of dozens of clinical scenarios with many different features (and which not always include the famous "crises").

Thus, the main research direction of the group is to combine the techniques mentioned earlier in this text - that is, take a multimodal approach, to extract different information from the brain dynamics, both in normal and pathological conditions. Each of these techniques makes use of specific physical principles, which allows multiple forms of interaction with the brain tissue, allowing extraction of information of both anatomical and functional nature; static and dynamic; electrical, hemodynamic (related to blood flow) and metabolic.

To perform these studies, the group interacts primarily with researchers from the Medical Sciences School (through the Department of Neurology and Neuroimaging Laboratory), Institute of Computing and School of Electrical Engineering at Unicamp. The group is also part of the Inter-institutional Cooperation for Support of Brain Research (CInAPCe), which involves Unicamp, USP, UNIFESP and Albert Einstein Hospital.

The techniques and methods

Roughly speaking, we can divide the studies and techniques developed by the group in anatomical and functional.

Anatomical studies consist in performing mathematical analysis of images of brain anatomy (obtained with magnetic resonance imaging or X-rays computed tomography), to discover how the various pathological conditions can be distinguished - ie, what parameters should be observed in the brain to achieve distinction of different conditions.

On the other hand, in functional studies the overall goal is to monitor the dynamic processes that occur in the brain, resulting from some cognitive, sensorial or motor processing. Both approaches are interconnected: for example, anatomical images also serve as reference for functional studies.

In the case of functional studies, the equipments used are able to obtain three types of signals (ie, information):

With these signals, you can create functional maps, which indicate what is happening at every moment in the brain in terms of nerve impulses, blood circulation and concentration of several substances that participate in brain metabolism (metabolites). 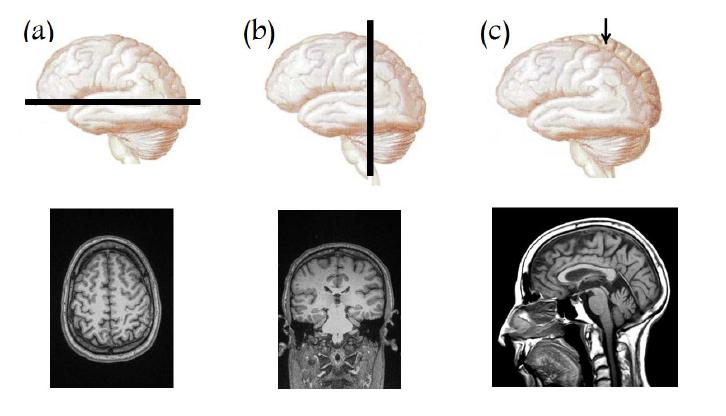 The technique most widely used in the group is magnetic resonance imaging (MRI), whose equipment is in the Clinics Hospital of Unicamp. This is because MRI is a very versatile technique that allows different types of approaches, and provides information on the structure (anatomical images as the ones normally seen in hospitals - see figure above) and on brain dynamics (functional maps).

Besides MR, another technique used to probe the brain is the so called optical tomography. In this technique, light is focused on the scalp. The light frequency (in the near-infrared range, close to visible light) is such that organic matter is partially transparent to the light. Thus, the light enters the brain and spreads within it without causing damage. Diffusing in all directions, some of the light ends up reaching back out of the scalp and is then captured by light detectors (see illustration). This light that goes into and out of the brain provides information on cerebral tissue oxygenation to a depth of about 2 cm, enough to study the cortex.

The group also uses combinations of the three types of techniques (electroencephalography, MRI and optical tomography). They are what is called "multimodal methods". Since 2005, the group works with a combination of the first two, called EEG-fMRI ("fMRI" is from "functional Magnetic Resonance Imaging"). The idea is to explore the complementarity of the two associated methods. First, because EEG has good temporal precision (informs with high precision the instants when the phenomena happen), but low spatial accuracy (informs poorly in which part of the brain they occur), while fMRI has the opposite characteristics. And second, because EEG picks up electrical signals, while fMRI measures hemodynamic parameters. 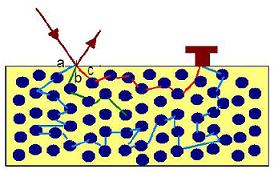 How optical tomography works: light that enters the cortex, when diffusing, may go back to the detector, as happens to the red (c) and blue (a) paths shown above.
Source: thesis of Rickson Coelho Mesquita, IFGW / UNICAMP (2008), p. 26.

With the exception of the MRI equipment, the rest are prototypes. Scientific research is often carried out with partially (if not wholly) handmade instruments, because they must be suitable for the specific purposes of the investigation. However, through the Program CInAPCe, the Neurophysics Group has an agreement with Philips, through which group members have full access to the detailed operation of the MRI system, so that new methods, processes and equipment can be developed, producing technological innovation.

Two ideas for next steps are (1) build theoretical models of brain function based on the results of these studies and (2) adapt other combinations of the three main techniques. Currently, the group is improving the combination of EEG with optical tomography (EEG-NIRS, with “NIRS” meaning "Near-Infrared Spectroscopy"). It is also thought to combine all three: EEG, MRI and optical tomography. The construction of theoretical models based on the results of these investigations is also a challenge for the future of the group.

The Neurophysics Group appeared linked to Interinstitutional Cooperation for Support of Brain Research (CInAPCe). This cooperation emerged from personal interests regarding neuroscience of people from the Institute of Physics at Unicamp, such as Roberto Covolan, currently leader of the Neurophysics Group, and also from interest from the Neuroimaging Laboratory group of the School of Medical Sciences (FCM) at Unicamp, in creating a multicenter multidisciplinary research program in the field of ​​neuroscience. Talks began in the late 1990’s between Covolan and Fernando Cendes from FCM. The relationship also included Li Li Min and Mario Saad, from FCM, and Carlos Henrique de Brito Cruz, from the Physics Institute.

When it became clear that the CInAPCe program had firmly established funding programs, Covolan and Gabriela Castellano, another scientist included in the group, started accepting post-graduation students, from 2004 to 2005. Shortly thereafter the formal creation of the group was proposed to the direction of the Physics Institute.

The Neurophysics Group is now the institutional vehicle through which the Physics Institute of Unicamp is inserted in the CInAPCe Program. Many of their research works are done in connection with the studies of this cooperation. The group was the first in Brazil to use optical methods (NIRS) and the combined EEG-fMRI technique (this in collaboration with the Neuroimaging Laboratory) in functional studies of the brain.