Info about the LNI

The Nanostructures and Interfacial Science Laboratory investigates physico-chemical phenomena in living organisms, notably bacteria and processes taking place at air-liquid and liquid-solid interfaces. The approach is multidisciplinary, and there is a strong interaction with biologists and mathematicians. Basic and applied research is developed, the latter often made in collaboration with private industries.

The biophysical section includes studies on bacteria and fungi, their behavior under certain conditions, produce materials and substances capable of protecting them from the environment. One example is research on the bacterium Acidithiobacillus ferrooxidans. It is used by metallurgical industries that process iron ore; because this bacterium can leach copper out of an iron ore residue, an activity that is necessary before the mineral can be disposed off and not contaminate the soil. After the action of the bacteria, copper oxide precipitates and it's easy to extract it from the mineral. These bacteria produce a "cover" of a protective polymer called “Extra Polymeric Substance” which was studied by the group.

In another study the team looked at how these same bacteria associate in groups when deposited on substrates forming biofilms when subjected to certain adverse conditions such as, hydric stress. The defense mechanism acting on aggregated bacteria results in less material used to build their protective polymer coating. The bacteria-bacteria communication (quorum sensing) can be investigated using this technique. Another interesting investigation is the action of bactericidal and fungicidal agents formed by lipopeptides acting on Bacillus Subtilis. What has been investigated in this case is the formed nanostructure on the outer surface of the cell wall under the action of these agents. 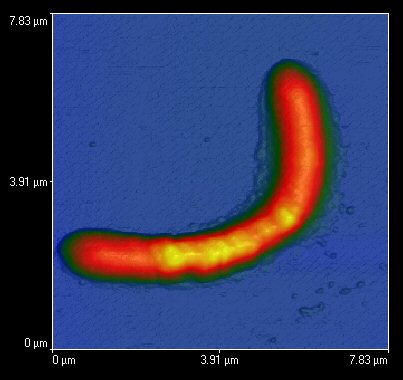 Nanostructures of surfactants and water-air interfaces and water-solid

Methods used to observe condensed matter nanostructures are also used for studies of biological materials on air-liquid and liquid-solid interfaces. The boundary between water and air bubbles has several interesting features - for example, in the so called double-layer region, there is evidence of dynamic nanostructures formed by water molecules.

Another structure particularly interesting is formed when surfactants are present in water - a substance whose molecules are capable of spontaneously clustering to form micelles with a diameter of some tens of nanometers in diameter. Surfactants are an active field of study, not only as the material that soaps, detergents and shampoos are made, but also for its potential as nanostructures assembler. Micelles in solutions have properties and behavior that can be used, for example, as drug carries inside the bloodstream. Many applications are possible when they associate spontaneously in periodic structures; in this case, they can serve as "template" to produce periodic nanostructures. Another idea is to use the micelle assembly to produce electronic devices with the potential to replace semiconductors in the future. The group has been investigating these possibilities to manufacture nanostructures and devices using the water-surfactant systems.

Experimental methods – imaging techniques such as atomic force microscopy (AFM), scanning tunneling microscopy (STM) and confocal Raman microscopy are used as well as X-ray diffraction and quartz microbalance. The atomic force microscope is usually used to image hard solid materials, but the group has adapted the instrument to investigate "soft" matter as interfacial liquid and biological materials in solutions.

The group emerged from the developments carried out initially in the former Energy Group, formed by a relatively large number of teachers, students and technicians from various UNICAMP institutes and colleges in the wake of energy crisis caused by the First Shock Oil in 1973. An alternative energy vector addressed by this group was hydrogen, and in particular its production from the water electrolysis - a process capable of separating oxygen and hydrogen molecules present in water. One line of this project was to investigate processes at the interface hydrogen bubbles and water in order to better understand the phenomena involved in the process and be able to design more efficient methods to extract that gas from the solution.

Researches in this line have gained autonomy and later a separate group was set up that studied the air-liquid interfaces in several configurations, not only for hydrogen production. After nearly ten years, other lines of studies have developed, particularly involving interaction with companies - there was even a group's participation in the Proalcohol Program (who later produced the alcohol cars in Brazil) and cooperation with various industries.

When an atomic force microscope was purchased by the Group the study of air-water interface was resumed. Furthermore in order to explore the potential of the apparatus various nanostructures were fabricated. The study of air-liquid interfaces, associated with the research on nanostructures has led to the diversification of research going into biology and consequently increasing the interactions with biologists, chemists and mathematicians in the development of multidisciplinary research.