The main research subjects of the Group of Organic Solids and New Materials are computer simulations of structural, electronic and transport properties of nanostructures. Of particular interest are structures related to metallic nanowires, carbon nanotubes and graphene. We also use statistical and analytical methods to study various other phenomenon, such as; the evolution of biological species, development of radiation sensors and the physics and chemistry of conducting polymers.

In most cases, team members make their theoretical studies in association with experimental groups, so that there would be an effective collaboration / experiments, which facilitates the testing of theoretical models and predictions, and sometimes, the proposition new experiments.

Nanostructures are objects that have, for some of their dimensions, only a few nanometers (billionths of a meter). They are subject of an active field of research with great potential (or already realized) technological applications in various fields, from pharmaceuticals to electronics. Interest in them are due, in part, because of that their small size create properties that are not present in macroscopic made versions of the same material. Another important aspect is that the reduced dimensions surface / volume ratio is very high, and therefore phenomena related to surface aspects (such as, catalysis) are of great importance. As a consequence, they present a rich range of new phenomena that are being investigated worldwide. Nanotechnology is now one of hottest topics in pure and applied science. Nanowires, for example, may be useful for the next step in the miniaturization of electronic systems. Carbon nanotubes can be the basis to built new functional materials with novel properties (i. e., high shear mechanical strength resistant to high temperatures).

The use of computers to perform simulations of new or existing materials allows the study of phenomena that would be much more expensive, or impossible, to be carried out in the laboratory. This type of study is an important aspect of the more general line of research in theoretical physics, called "computational physics". The group's activities include the development and adaptation of computer programs for various applications to the investigation of problemas such as: the mechanical properties of "forest" of nanotubes (if this configuration is stable), atoms and molecules oscillating inside nanotubes, carbon nanotube composites composed of nanotubes straight or helicoidal, or nanoscrolls (papyrus-like shape); how these materials behave under ballistic conditions, what happens when nanowires are pulled up, or when they collide with something, how they behave when the temperature increases, or when impurities are present, or when electrical current passes through them (an interesting effect is that the electric current in nanowires is quantized - only a few well-defined values are possible).

Eventually, the new structures theoretically predicted can be made in laboratories. Theoretical discoveries about new properties can guide the experimental groups in their research - as well as - experimental research may indicate ways for the development of new theoretical models.

A major objective behind this research is to explore the possibilities of technological applications. Another is to understand how nanotubes and other nanostructures are formed in the laboratories, which are not yet completely understood. A third is to understand the physics behind the various phenomena peculiar to these systems.

The computer programs using statistical approaches can be adapted for use in a large variety of different systems. The team has conducted studies in biophysics using them - population dynamics and biological evolution of cigadas, or the solution of problems related to the chemistry of polymers using algorithms based on the way ants find the best route from one point to another, by trial and error.

Here are some examples of structures investigated by the group. The images of the actual experiments were obtained by collaborating groups and published in the same items listed. 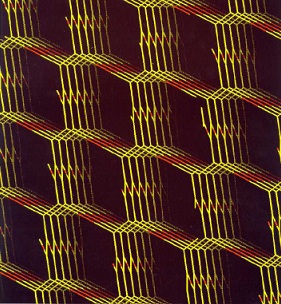 Most materials contract and become less dense when stretched. Materials with these counter-intuitive properties, i. e., they expand laterally to increase the density, are called auxetics. They are very interesting materials for their intrinsic properties and a high possibility of technological applications, including many of military nature. We predicted from computer simulations that pure carbon made structures (as shown above) could be auxetics. This was recently confirmed for materials made from mixtures of carbon nanotubes
Source: Baughman and Galvao, Nature 365, 735 (1993), Hall et al., Science 320, 504 (2008) 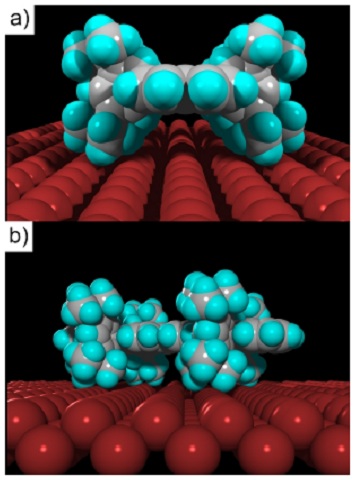 Simulation of the adsorption of an organic molecule (Lander Violet or VL) on a metallic surface (copper). It was experimentally observed that the ability of these molecules to diffuse along the surface can vary up to 100 times depending on their orientation with respect to the crystallographic orientation of the copper surface. The simulation was explain to explain this peculiar behavior: in a certain position, as in (a), the molecule "fit" into the crystal lattice of copper, which makes it much more difficult to move and thus diffuse on the surface. This was the first observation of a non-biological so-called key-lock effect
Source: Otero et al. Nature Materials, 3,779 (2004) 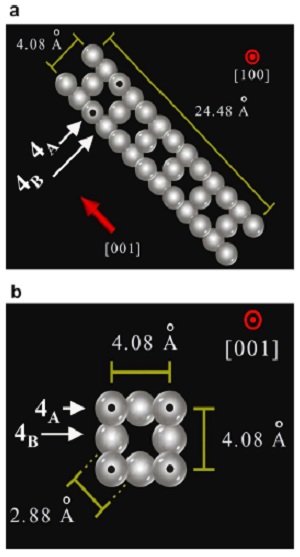 Despite many years of investigating the formation of metal nanowires from mechanical stretching, some unexpected results continue to be produced, such as the discovery of silver nanotubes, the smallest possible with square cross section, as shown in the figure above
Source: Lagos et al. Nature Nanotechnology 4, 149 (2009); Autreto et al. Phys. Rev. Lett. 106, 065 501 (2011) 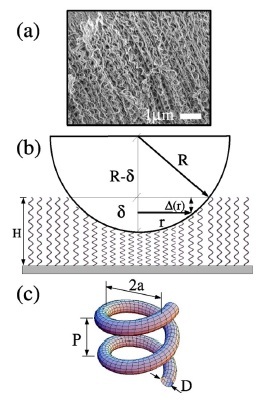 A "forest" of coiled nanotubes: in (a), a high resolution transmission electron microscopy image; in (b) a scheme of the ballistic experiment showing a ball colliding with the surface and in (c) schematic of the coiled nanotube. The group simulated what happens when the ball is dropped onto the surface with helical nanotube forest. The system behaves like a ball-spring structure
Source: Coluci et al., Phys. Rev. Lett. 100, 086807 (2008), Fonseca and Galvao, Phys. Rev. Lett 92, 175 502 (2004)

Computer simulation of the formation of metallic nanowires. A peculiar characteristic of metallic nanowires is that they can be stretched up to limit where few atoms lined up (atomic chains) and remain in this configuration for a surprisingly long time. This happens for various metals such as gold, silver, platinum, cobalt and palladium. It has been observed that for gold nanowires the distance between the atoms can be close to 5 Angstroms, while in bulk gold, the typical distances are 2.88 Angstroms. The explaination these phenomena represented a real challenge that computer simulations and theoretical interpretations suggested that the origin of the anomalous distances are the contamination by light atoms (carbon). Above: Formation of nanowire composed of atoms of gold and silver, obtained from molecular dynamics simulations
Source: Bettini et al. Nature Nanotechnology. 1, 182 (2006) 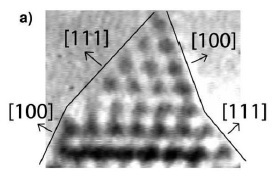 Nano-structures often exhibit properties that are not intuitive. An example is the formation of defects. When the structures become very small the cost to form defects can significantly increase, creating limits on what is the smallest structure where is still possible to create defects. These problems are very complex and simulations can help to investigate and to understand some aspects of these problems. Above: microscopy image of a platinum nanocontact and a structural model of it. The spheres represent the platinum atoms
Source: Rodrigues et al. Phys. Rev. Lett. 99, 255 501 (2007); Lagos et al. Phys. Rev. Lett. 106, 055 501 (2011) 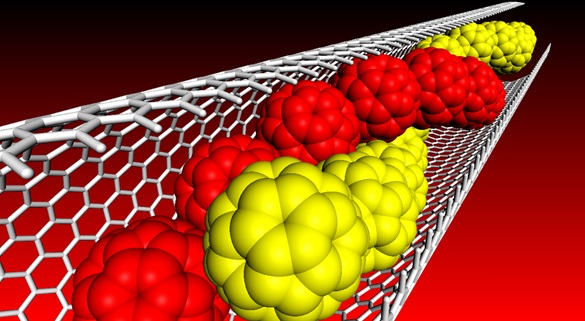 Molecular dynamics simulation of nanopeapods (fullerenes inside nanotubes). The "ball" is the C60 fullerene. The figure shows the formation of a double helix of fullerenes inside the nanotube
Source: Troche et al. Nano Lett. 5, 349 (2005) 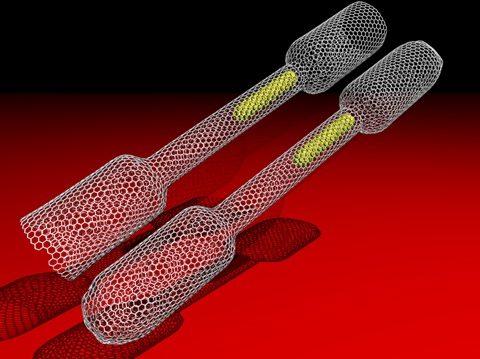 Carbon nanotubes are extremely versatile materials, which can be used in a wide range of applications including nanodevices. In the above figure is shown a possible nano-oscillator comprising carbon nanotubes of different diameters. Molecular dynamics simulations have shown that these devices could operate in the gigahertz frequency
Source: Legoas et al. Phys. Rev. Lett. 90, 055504 (2003) - Article of the cover of the February 7