Research Group in Physics and Nanostructured Materials nanosystems have basically two parts: experimental studies of nanostructures (nanowires, nanoparticles) and development of instrumentation for the same, including equipment and software.

The investigation of the properties of nanowires and nanoparticles - structures with up to a few tens of atoms in dimension - is a fundamental part of nanoscience and nanotechnology, since most of the nanodevices will be made of these tiny objects. Their characteristics are very different from what would be expected if a macroscopic object made of the same material was considered. The reason is that, because they are so small - nanowires that are a single atom thick have been produced already- the properties of their surface play a significant role, changing their behavior as a whole. Furthermore, in this size scale, quantum effects may become important (such as the quantization of electric current).

Considering the nanowires, the GFNMN aim is to explore their characteristics by investigating their electric, mechanic and structural properties through experiments that analyzes how they carry electric current, what happens when they are stretched, bent or compressed and the consequences that small defects on their atomic structure cause to such characteristics. To perform these experiments a combination of techniques and equipments is required. The primary method used is the observation of nanowire’s atomic structure by means of electron microscopy, where the studies are made at the National Synchrotron Light Laboratory’s facility (LNLS) in Campinas. Together with the experimental data there is a theoretical work of computer simulations that aids the interpretation of data. The theoretical approach is made by other groups at IFGW in scientific collaborations. The information from both lines - Theoretical and experimental - when properly connected, produces knowledge that could not be obtained with only one of them. 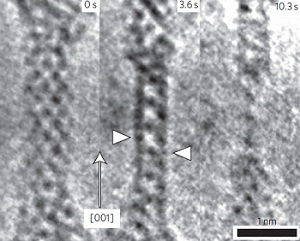 Novel systems have been addressed by the GFNMN in the past few years concerning the study of nanoparticles on surfaces. It comprises the development of a Scanning Tunneling Microscope (STM) and Nanoclusters Source. Both are results from scientific instrumentation, being designed and constructed entirely at the institute.

In the area "instrumentation", the idea is to make the specific instruments for cutting-edge research, using it for the knowledge produced by the group. All equipment used by its members were made within the team (except for the electron microscope, which is not done by hand, is purchased). The reason is that in research at the forefront of physics, equipment must be designed in a very specific way, so that in general can not be found on the market - should be constructed by the researchers themselves. This must be done from time to time, since the very specific nature of the equipment requires its replacement with the advancement of research.

The latests equipments in which this part of the group's activities are focused are the Scanning Tunneling Microscope (STM) and a Clusters Source for mass selected metal clusters.

The STM is a microscope capable of distinguishing the very atoms on a surface. Its goal is to investigate nanostructures that are layered over surfaces. This kind of microscope is characterized by the presence of a sensor kept really close to the sample’s surface. The sensor is basically a metallic needle and the distance is typically around 1Angstrom, which is smaller than the diameter of most atoms. At such short distances it is possible to extract electrons from the sample without touching it, a phenomenon known as tunneling and the electrons are measured as a electric current (tunneling current). As the sensor is scanned over the sample, the differences on the surface’s morphology tend to alter the distance between the sensor and the surface, which reflects on the amount of electrons that are extracted. The closer the sensor, higher the electric current. This change on intensity is so sensitive that it is possible to see the differences due to a single atom. The controlling electronics treat the data and convert it into information about the sample’s surface.

Once the sensor is held so close to the surface, it is imperative to isolate the whole microscope from external mechanical vibrations. In order to do so, it is built over a pneumatic table that dampes the majority of vibrations with resonant frequencies higher than 1 Hz and amplitudes smaller than one micron. Besides that, there is also a damping from the microscope itself. The microscope has a very rigid body that helps the sensor and the sample to follow some of he external vibrations in a way that it doesn’t affect so much its operation. 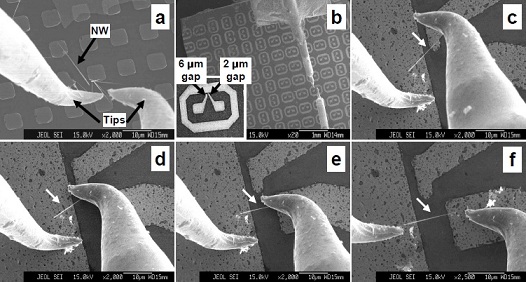 Sequence manipulation of an InP nanowire (indium-phosphorus). On both ends take a nanowire (a), transport it to a substrate with gold contacts (b) and is positioned between two of these contacts (cf).
Source: Doctoral Thesis Denise Basso Nakabayashi, Unicamp / IFGW (2007), p. 29.

The Cluster Source - This is a machine that synthesizes nanometric particles in a gas. This device produces a cloud of nanoparticles of various sizes, then an electrostatic system separate them according to their masses: the electrical attraction further accelerates the lighter and, therefore, they are separated in space according to their masses and we can collect only those with the size we are interested. Thus, it is possible to obtain particles of only a few atoms, of pure metals and metal alloys. They have unique properties that depend strongly on their size. This instrumental part of the research requires additional training of students within the group, focused on activities required in this type of study, such as construction of electronics, vacuum and mechanical design. Students gain training in areas that traditionally are not part of the formation of a physicist, known commercial systems technology to know what to buy and what not to buy, keep contacts with the technical side, technical jargon of the field.

The Group was created in 2005, with the opening lines of research investigating nanowires through electron microscopy and by using synchrotron radiation at LNLS.

Since then, the team not only has specialized in research of nanostructures (including also clusters and nanoparticles on substrates), but also in the construction of their own equipment.