Info about the GML

The Alloys and Metals Group (GML) investigates peculiar properties of certain alloys, particularly those having the magnetocaloric effect and those that have their particles forming the so-called “Strongly Correlated Systems”, responsible for several unusual properties of these materials.

Therefore, there are basically two lines of research: the magnetocaloric effect and strongly correlated systems. The performance in the two fields is facilitated by the fact that the preparation of the samples, made by the group itself, it’s done by the same methods in both lines.

The first subject, the magnetocaloric effect, refers to the phenomenon by which certain materials will heat up when they are exposed to a magnetic field - and cool down when the field is withdrawn. As a matter of fact, virtually all the substances exhibit this effect but it is very little pronounced in general. However, in certain intermetallic compounds and under certain conditions, it may appear intense enough to allow technological applications. The main potential use is the magnetic refrigeration - that can replace traditional cooling in refrigerators and air conditioners and is also useful for producing cryogenic temperatures for scientific researches in the laboratory.

An advantage of magnetic cooling over traditional devices is that they can be very small because they do not need a compressor - and because, instead of gas, a solid is used as refrigerant. Also they may be more efficient because common compressors waste too much energy to friction of the pistons, and are much less polluting, since the gases used in normal refrigeration attack the ozone layer and contribute to the greenhouse effect.

To get to these applications, it is necessary to find materials that exhibit the magnetocaloric effect at room temperature, sufficiently strong to replace the traditional techniques of refrigeration – and using cheaper and less toxic substances. For this, we must understand the physics behind the phenomenon. To better understand it and possibly find new and not yet explored phenomena, the group investigates the effect in many aspects (eg, effect of anisotropy or varying the pressure - for technological applications, it is interesting that the pressure is as close as possible to atmospheric), and using various experimental techniques. The studied materials were based on gadolinium, or arsenic with manganese or yet, gallium or aluminum. 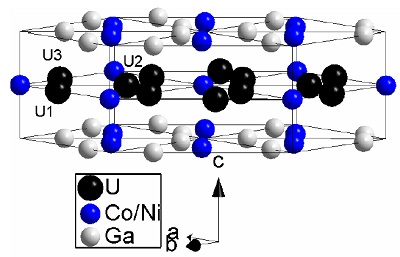 In this second line of research, the term "strongly correlated systems" refers to situations in which the particles of the material (mostly electrons, but also gaps of electrons) can have a collective behavior involving simultaneously a large number of correlated, "orchestrated", particles and as a result, the material has unusual properties. One of the most famous is the superconductivity, but the possibilities are very rich and the group investigates several other unusual features. For example, there are cases where the specific heat (the amount that the temperature of the material change when it receives or yields a given quantity of heat) has higher values than the known standards. The electrical resistance may also vary surprisingly, falling sharply as the temperature lowers. Materials with this kind of effect are based primarily on cerium, ytterbium and sometimes in the samarium.

Another phenomenon extensively studied by the team is the effect Kondo, in which the electrical resistance of certain materials increases as the temperature decreases (usually resistance increases with increasing temperature). This happens at low temperatures and in some metals with magnetic impurities. Examples of samples studied by the group are cerium, ytterbium and uranium; example of impurities are lanthanum and yttrium.

The Kondo effect is connected with a specific type of strongly correlated system, which are the heavy fermions. In the so-called heavy fermion materials the electrons behave, because of their collective behavior, as if it had hundreds of times more mass than a normal electron.

To understand the physics behind these phenomena, we investigate how these effects vary when certain material parameters are changed, as when the pressure changes or some of the atoms are replaced by atoms of other metals (chemical substitution). Since the Kondo effect is derived from a small disorder in the material caused by the impurities, the chemical substitution is capable of producing the disorder in a controlled manner so that it could be diagnosed by witch mechanisms it produces alterations in the Kondo effect and thus the mechanisms of the effect itself.

The study of these diverse phenomena is done with a series of experimental techniques, know-how incorporated into the group over time. They are calorimetry, the electron spin resonance (EPR) and techniques for determining the magnetization, the magnetic susceptibility, the resistivity and the magnetoresistance (ie, how much the electrical resistance varies when an electric field is applied on the material). 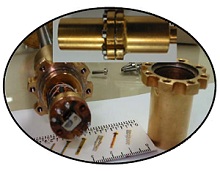 The Group Metals and Alloys emerged in the mid-1980s. The basic line of research at the time was on magnetic properties - mostly of strongly correlated systems, including the Kondo effect. The basic physics behind the phenomena was studied. In the beginning, there was an association with the research on superconductors. The group's activities have evolved over time to the electron paramagnetic resonance (EPR) and, from it, many techniques to study solid state materials have been developed – and with them, several lines of research on properties of metals and alloys, as calorimetry, electrical resistivity, articulately and complementary to each other. Since the mid-2000s, the magnetocaloric effect is studied.