Plasma is a fourth state of matter, following solid, liquid and gas. As we warmed up a substance, its particles (atoms or molecules) are increasingly shaking wildly, and their linkages weaken or break up. Thus, in the liquid state particles are weakly linked compared to the solid (so as to have undefined shape) in the gases, this linkage is virtually nonexistent.

Now, if a gas is heated up several thousand degrees, the particles (molecules or atoms) are separated apart (losing electrons and becoming ionized), giving rise to a new state of matter called plasma. This can also be achieved by passing electricity in gas - examples are "cold plasmas" inside fluorescent lamps and plasma TV screens.

The plasmas are of interest in astrophysics – are present inside the sun and stars - and in material processing - for example, in the manufacture of very thin films with up to a few atoms thick. However, plasma is more popular because they offer the possibility of obtaining controlled thermonuclear fusion (from hot plasma). That it would be a source of abundant energy and a lot cleaner than nuclear fission, commonly used in nuclear power plants (see box below). It said to be "controlled" as opposed to the energy generated in the explosions of hydrogen bombs (H bombs). 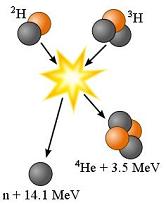 Nuclear fission occurs when an atom splits into two or more particles and release energy. In the figure, a nucleus of a uranium atom is struck by a neutron, becomes unstable and is divided into a nucleus of barium (Ba) and a krypton (Kr), and three more neutrons and energy. Occurs, for example, in the reactors of common nuclear power plants, where the uranium is usually used as fuel. The released energy is used to heat steam which, in turn, through a turbine drives a generator to produce electricity.

In nuclear fusion, two atomic nuclei fuse to form one and also releasing energy. This happens inside the sun (and is the source of solar energy) and in small-scale, inside controlled nuclear fusion devices. In fusion, the most widely used fuel would be hydrogen isotopes (such as deuterium and tritium). In the figure below, a deuterium atom and a tritium (two different types of hydrogen) fuse forming helium and releasing energy of 3.5 MeV, and leaving a neutron, which carries more than 14.1 MeV.

The main practical difference between the two processes is that the energy released by fusion is higher (in proportion to the amount of fuel burned) and it is much cleaner than fission. The fission produces radioactive waste for very long duration, such as plutonium and contaminated materials, in the fusion would activate only the walls of the reactor, and tritium, which would be used as fuel, and has an average life of only 12 years.

It turns out that the technical and theoretical problems involved are immense. The research on the subject already has 60 years and more 60 may need until the first controlled fusion power plant begins to produce electricity commercially. Large fusion experiments, based on machines called tokamak, are being built. The most promising is called ITER in southern France, which involves the collaboration of several countries (EU, Japan, USA, Russia, China, India and Korea South).

The Plasma Physics and Controlled Thermonuclear Fusion Group actuates on hot plasmas in order to contribute to solving these problems.

The plasma needed for controlled fusion would be too hot - tens of millions of degrees Celsius – and can not be contained in normal vessel: it is necessary to avoid contact with the solid wall materials (this in addition to damage them, also would cool the plasma). To do this, one can take advantage of the fact that plasma consists mostly of electrically charged particles. The idea is to use magnetic fields and electric currents induced in the plasma so as to conveniently deflect the trajectories of the particles (which usually go fast and randomly back and forth) in order to keep them within a region of space. This is called "magnetic confinement". 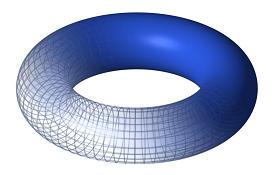 This magnetic field is generated by electric currents (analogous to a magnet). The structure most proper for confinement is shaped like a tube or a donut, called torus or toroid by physicists and mathematicians.

But nothing is simple in controlled fusion. The particles tend to move out of the torus, and when they reach the walls of the apparatus, the plasma cools down and the system halts. To resolve this, one should study the plasma physics to determine ways to prevent such movement, called the drift.

If the hot plasma survive for about 10 seconds, with sufficient density (about one millionth the density of air at atmospheric pressure), the device could produce more energy than you would consume, condition known as the Lawson criterion, so that beyond this criteria we can build a power plant that generates energy (not consuming).

So far, only the tokamak JET (Joint European Torus), at the UK, managed to keep the plasma confined for a few seconds, but at a temperature below that required, a few tens of millions of degrees. It is expected that ITER can reach this goal and become the first reactor to produce more energy than it spends. It is envisaged the formation of the first plasma (150 million degrees) in ITER in 2018 and the beginning of operation of a power plant based on the unit in the 2030s.

The Group conducts theoretical and experimental research on the problem of controlled thermonuclear fusion in magnetically confined plasmas. In the theoretical, investigates, for example, physical models (theory) that describe the improved plasma confinement and reduce to a minimum as possible drift of the particles, and also how to produce an electric current in the plasma using so-called non-inductive methods, as an alternative to the most common method of obtaining it by means of an apparatus similar to a transformer (i.e., by electromagnetic induction).

Is the tokamak dangerous?

Once the plasma is inside the tokamak at a temperature of millions of degrees, one can imagine, what happens if the plasma touches the walls of the apparatus, or escape to the external environment. In fact, next to nothing. The reason is that the plasma density is very low (NOVA-Unicamp is one million times less dense than air). Therefore, there is very little hot stuff inside the tokamak. If he touches on its walls, there is almost nothing happen, the plasma cools and returns to gas. Thus, a possible accident with the chamber of a tokamak would not imply in dangerous radioactive leaks.

The experimental part also addresses those problems, together with the theoretical. For this, the laboratory has a tokamak called NOVA-UNICAMP, received as a donation from Japan in 1996. It is a small device in comparison with the giants around the world, but the size gives advantages: it is much cheaper to make it work, and thus we can repeat an experiment many times as you want until you get to a conclusion about a theory or a test.

The NOVA-UNICAMP performs experiments on hydrogen plasmas. The gas inside is one million times less dense than air. (1013 particles per cubic centimeter). To produce the plasma, the device raises the temperature of the gas to about 1.5 million degrees Celsius (this is the temperature of the ions, the electron is higher). The plasma survives for 15 milliseconds, sufficient time to carry out investigations of the group. Despite the low density, a magnetic field of 1 Tesla maintains the plasma at a pressure greater than 20 times atmospheric pressure. 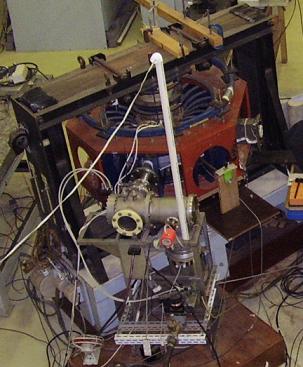 The tokamak NOVA-Unicamp can be seen with current conductor coils, in blue, within the structure in red 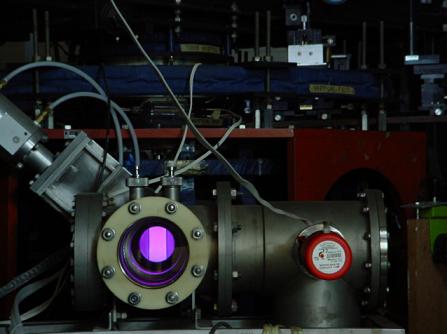 The metal tube window in front of tokamak. Through it, you can see the brightness of the plasma inside the unit

Main experimental studies is to measure basic plasma parameters such as temperature, density and types of impurities that are present inside hydrogen plasma, so you can develop a diagnostics or to test some new techniques and analyze their results - which can then be compared with measurements obtained in other tokamak or theoretical results.

The study of particles constituting the plasma is important because there are always impurities that affect the supply of energy: if there is too much heavy particle, they absorb the energy that should go into the hydrogen, which are of interest. However, impurities also provide information about the plasma, because the ionized hydrogen (without an electron), main constituent of plasma, is very poor source of information. The reason is that this information comes from the light emitted by the electrons of the atoms - but ionized hydrogen has no electron.

The group began with the arrival of Prof. Paul Sakanaka in 1974 from the Courant Institute of Mathematics at New York University, USA. Prof. Sakanaka was one of the Brazilian physicists abroad invited by Prof. Sergio Porto to form the IFGW Department of Quantum Electronics (DEQ). With him came several others, including Prof. Busnardo Jose Neto, Ricardo Galvão, Shuko Aihara, Massanobu Niimura, Helmut K. Bockelmann and Aruy Marotta.

Prof. Sakanaka wanted to work with plasmas and thus founded the first theoretical and experimental plasma group in Brazil whose main objective was to study this issue. Initially at the DEQ main building, the laboratory was transferred to a new building in 1980 (the Laboratory of Plasma).

At that time, the tokamak was not yet installed, there was a machine working with similar principle, called theta-pinch (the "Tupã"). The difference is that the theta-pinch is straight, not toroidal. The Tupã generated electrical current of one million amperes and voltages of the order of 100 000 volts on his coils.

Also in this initial period, in experimental work led by Prof. Shuko Aihara and later by Prof. José Busnardo Neto and Aruy Marotta, the group produced the first plasma torch of Brazil, an instrument that has several industrial uses. Marotta in 1987, founded the Group of Plasma Physics and Technology, devoted mainly to these torches.

In 1990, there was a drawback in the studies of controlled nuclear fusion in the world. The U.S. Department of Energy concluded that the strategy to achieve fusion, based on tokamak, was not the most reasonable, and practically the whole country magnetic fusion program was suspended. Some U.S. laboratories were closed - until then, the largest tokamak researches in the world were there. But the rest of the world - especially Europe and Japan - continued to believe in tokamak.

Brazil insisted that line and now is the only country in the Southern Hemisphere that invests in the construction and maintenance of tokamak (there are others groups researching plasma, but do not have these machines, such as Argentina).

Today, the United States, besides participating in the ITER project, also try to achieve controlled fusion with so-called "inertial fusion" based on large number of nuclear micro explosions produced with the aid of laser beams. One of the main experiments in this line is the National Ignition Fusion Experiment (NIFE).